Baubles Vol. 1 - Down To Middle Earth

Baubles Vol. 1 - Down To Middle Earth 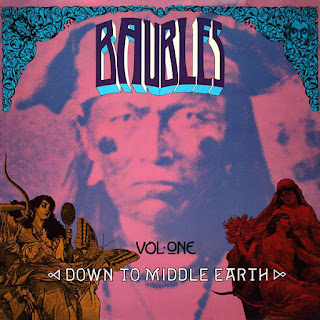 This is not sixties garage punk, I know I know..
Not that anyone ever could put their finger on exactly what that is.

Anyway, this is the kind of comp that could end up on the shelf if you were a rabid comp-collector.
And it is a very nice album!

Merrel Fankhauser & HMS Bounty kicks off the album with the-little-too-darn-sweet Things (Goin' Round In My Head), but later we'll find A Visit With Ashiya which is a mystical piece of hippie magic. Hear the holy bells and gentle sitars! See the fine silk and the living candles! Smell the exotisk incense and the dirty hippie jesus sandals!
A great track. I love this kind of shit. When psych is this soft and cozy it is very hard for me not to fall in love with it.

Things get a little confusing and slightly sad as the mighty heavy-hittin', hard-honkin', wild-eyed-wailing' Sonics takes on Frank Zappa's Anyway The Wind Blows.
It starts out with a frustrated lonely wah-wah crying in the alley, then we jump straight into a strange cover of Zappa's tongue-in-cheek doo-wop crud, and it is a pretty uncomfortable listen.
After the sweet singing with glockenspiel & such, we then dive into this mire of wah-wah, a wah-wah as groovy as nails on a blackboard. I think my dad would make a better job.
Seriously - sounds like shit.
The song thankfully ends, even if you wonder a couple of times if it ever will.
But not before punishing you with turn-of-the-last-century wind machine and some Eight Mile High-inspired pirouettes on the guitar.
Doggone awful and a bloody shame.


Daily Flash try to brighten things up with a bit of baroque pop and even if it's not the most exhilarating baroque pop there is, it is still a cool listen and has that special autumn-y quality I so much enjoy with light psych.
Jack O'Diamonds (the 45 before this) is a lot cooler tho..


Fever Tree enters and here we go! It is the first of the four wild numbers on this album.
Crazy guitar, hairy growling, marching drums, wyld syncopated beats, a fucking german flute - exhausting!
There's a certain flavor of Music Machine in my mouth. Strange.


NOW WE GET TO MY FAVE TRACK!
If this wasn't here I might've not bothered with this groovy comp.
But no-one can rest until Rabbit Mackay & the Somis Rhythm Band anthemic Tendency To Be Free is known across the world!
Don't you just wanna lose 50-60 pounds, buy a leather vest, get a bike, start a bonfire, drop a tab, take a nightly shower in a waterfall or some other wild and crazy shit like that?
You know, just stick it to The Man one last time? And this time as a biker?
Listen, you can be whoever you want in your fantasy, but in mine I'm a sunburnt, dusty, spaced-out, leather clad, bikeridin', wraparound-shade-wearin', heavy-smokin', hard-fuckin', easy-livin', gun-packin' rebel of the highway, livin' day to day, hand to mouth and with an EXTREME tendency to be free.


Ill Wind - I like them. Just too bad some hung-over christian first grade teacher bent someones arm hard enough to be allowed to screech into the mike 1:18 and onward. Buzzkill.

Lollipop Shoppe's You Must Be A Witch is known by everyone. It is great, ain't it?


Salvation does some much needed jazzy psych and I'm getting a little sleepy. Or woozy.
Wow, this is nice.. You know - when someone at a party suddenly out of the blue grabs your neck and start to give you a friendly massage (which I firkin hate) but before you can knock that sucker out, a warm unfamiliar feeling starts to spread and your mouth blossom out in a freaky deformed smile and you close your eyes and just let it happen even if you're not that fond of human contact? It's like that.
I probably won't do it again, but if I happen to cross my path in the future - who knows?


Nova Local offer us some cleansing airy soft psych - great track.
We also get entertained by some lively and amusing string-bending from some sitar-wielding studio-musician who apparently drew the shortest straw, but it is actually tastefully blended (well as much as you can blend that musical canoe with anything) into the song in the start and finish.
Bravo!!


Nightmare Of Percussion is what the title tells us - a fuck-bunch of jazzy drumbeating and som hip singin'.
Look - a bongo! And a cowbell? I think I hear a tambourine! Is that sleigh bells!?
Santa? Is that you..?
At 1:38 and thru the remainder of the song, Santa or God or Satan or some crappy actor reads some heavy free verse while the Strawberry Alarm Clock stands in the background singing "doo-dee-doo, doo-ooo, hmmm-mmmmm..."


This is the first and last of the Baubles "series" and it is a hilarious ride thru the renaissance fair.
I urge you to get a little funky and try this out.
C'mon, you can't listen to garage all the time! 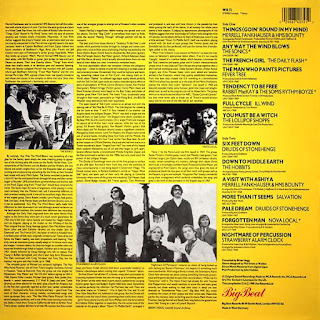 I also create my own comps. They can be found here and there and they carry the tag "R.I.P Records".

Don't forget to support your local dealer like Crypt Records, Norton and such.