You Take Me For Rides

You Take Me For Rides 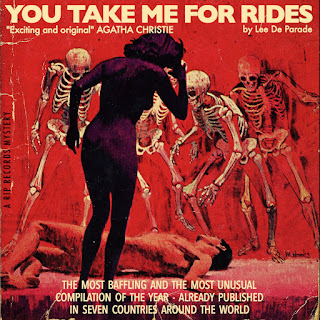 "Before we met I was lonely, then you came into my life
darling, you're my one and only, let me stay here by your side"

Great PS on this and an awesome way to kick of fthis (long overdue) set of songs.
Definately a grower, I just happened to have it in a playlist and it soon crept under my skin.
At first it was pretty 'meh' in my ears, but it is really a nifty little mersey-esque ditty.

Try-Angle - Writing On The Wall

"I see you walking down the street, and for a moment our eyes meet
if that's the way you want it, that's the way it will be - you don't love me no more"

Try-Angle stops a little short from releasing a 2-sided killer, because even if both sides are epic in their own right, they just don't quite soar the hights of Dovers, Squires and Es Shades.
Still - that is why I like it.
This rickety trolley is just rolling down the street with a dejected hollow sound without wanting to get too much attention.

Now, that is true downer garage right there!


Citations - The Day That She'll Go

"And now the time has come, I know
Today's the day that she will go"

What this jangler lacks lyrics-wise it makes up with crude naïve honesty.
This was their sole 45 and it has a pretty sorry flip. But I like this one.

Hustlers - The Sky Is Black

"Every night I wait for your call on the phone, it's no good - for the sky is black. Ooh.."

The haunting gasp of the freezing desert wind's got nothing on Hustlers.
Steadily on the verge of dropping their instruments and break down in tears, Hustlers soldiers on and makes their way thru the horror of teenage angst.


Seventh Cinders - You Take Me For Rides

Now we're talkin'! The Seventh Cinders makes sure this set get rockin and the tears starts rollin!
I could talk endlessly about this track and its hauntingly crude-ee-ful cinematic qualities but I will settle with just pointing the way to when the singer dances thru the moonlit misty graveyard, hopping from headstone to headstone singing "I don't wanna love you.." in his most romantic falsetto.

Dead Wunz - Til I'm Beside Her

"I lose just all desire, unless I am beside her"

Romantic loser mid-tempo ballad. Seems like it was written by some prince who lost his Cinderella at a dance where they danced until dawn and he.. well he refers to the winter and that he has no desire to live since she's gone. Cute.

"My world's been a mess for a couple of years, I think that pretty soon I'm gonna break out in tears"

Oh my gawd this sounds so much like Action Woman, it's insane! Well, might be because the Fabulous Depressions hailed from Minnesota - just like Litter - and they might've picked up a trick or two.
Just sayin'.
And hey - check those drums! Dem drums and dat organ makes it all come together.

Newports - Life Must Go On

"And wars will go on, and life must go on"

The Byrds seems to be lurking in the shadows in this grisly jangler. Even Dylan would probably frown at the gruesome imagery of the lyrics (who covers topics that sadly is as valid today as it was then.)

Sounds Of Randall - Wasting My Time

Looks pretty pedestrian on the surface but gets to you after repeated listening.
I can't put my finger on it. Might be some honest urgency goings on that is casting spells on me.

"It's a mystery, I gotta find out"

Vandals put out 3 solid 45's (their second featured I Saw Her In A Mustang, which is supreme raunchness), this being their first. Mystery was released again on the Tiara label (which also put out Melvin by Belles) but in another version.
Pretty solid production, I must say. Atleast more solid than the relationship between the singer and his girlfriend because my friend - that mystery you can't figure out seems pretty easy to solve.

"You may come within my world but I guarantee the sorrow"

Pushin' is totally off the charts when it comes to their sound. This is from the heady days of heavy rock, glitzy glam, rising disco and ramalama New York Dolls/Iggy & the Stooges proto-punk fests where Ramones are waiting in the wings in steamy backstages oh, and cocaine and heroin and tits and ass and all that jazz..
But Pushin' is content with the soft and clunky sounds they make themselves without too much noise and neon lights and fast drugs.
You can HEAR that this isn't from 1966 but man, the song sounds it is coming straight out of a sixties New England garage.

(PS I listed this as Don't Tell Her which is wrong - it is Just Tell Her, nothing else.)

"Til the end of time"

It is night. The studio is locked up. All is dark. No one is around. Ooorrr?
Hangmen slowly creeps in and begins to gently poke the instruments. When they are sure that they are alone they start to rock out in the most royal way.

The guys later recorded as the Five Canadians who we all know and love.

"She said there's no reason in trying"

Not as late as Pushin', but pretty late anyway, Blue Condition was a good 3 years past their time on this romantic ballad. Which is cool in my book. Which means they probably weren't dirty filthy hippies. Which is pretty cool too.
The flip to this is an insane slab of acid punk that probably renders this 45 costing top dollars and an arm and a leg.
That is, if you ever find it. I don't think there are too many in existence. Like, one. And I don't think the owner is about to sell it anytime soon.

"I see the sand, I see the river, and my eyes shed a tear just like before"

Hold it! Hooold it!! I SAID HOLD IT GODDAMN IT!!!
This is so fuckin great!! If you can't dig this...I don..I ca.. WHAT MORE DO YOU WANT?!? HUH?!?!
What more could you possibly demand from a bunch of awkward pimply teens?
Fuck Dovers! OK? Fuck Squires, fuck Es Shades, fuck it all!

Now you fuckin come here, stand next to - HEY COME BACK HERE! FUCKER!
Now you stand here next to this kid, he's just come back from a tear-soaked stroll down the fuckin RIVER which he - IN TEARS - wrote a song about! And now you rate it. Yeah, you heard me. Read him what you rated it in TeenBeat Mayhem (now on sale). Ok kid, listen to what this geezer thought of your openhearted song about getting your heart broken and all that.
You don't wanna tell it to him? Ok I'll tell it to him.

Folk-rock overload! Weeble Foxx has so many important things to tell that the mic barely can take them all in! But it sounds earnest and very important.
And that is good enough for me.


Tempters - I Will Go

This song absolutely hypnotizes me. It sways back and forth, it hums secret words I barely make out.
It is as if I don't really want to know more than that. It is here now, it has always been here and will always be here.
I don't even wanna know what it is all about.
I just love it. 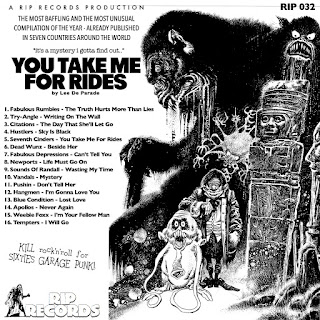